Rooftop tents are actually more likely to be counted among the heavyweights among tents. Due to their special structure with the massive floor, the hard shell, the gears, the gas pressure springs, the fittings and hinges, they bring an average of 45 to 75 kilograms to the fage, depending on the type of tent.

Again and again one meets the question whether the roof of the car can withstand the rooftop tent at all. And while BMW, for example, is even advertising with the possibility of sleeping on the body of the Mini, many other car manufacturers – at least officially – do not want to guarantee that you might not wake up one floor below the next morning.

VW drivers are losing out. From Wolfsburg it is said: “The roof load information applies to the dynamic and static state. If it is exceeded, the manufacturer will no longer be liable in the event of damage. “

What many do not know: The permissible roof load refers to the load on the roof when driving, there are high dynamic forces. This usually ranges from 75 to 150 kg. But no rule without exceptions.

Because they actually exist, the cars whose roof load is too low even for transporting average rooftop tents. And because you could get problems with an exceeded roof load in the event of an accident and in combination with an overzealous policeman, we looked around at which manufacturers also offer rooftop tents in the weight class “flyweight”.

OASIS from Trekking –
The folding chair under the rooftop tents

The OASIS of the French Company Trekking is supposed to put only 17 kg on the scale. In the construction, it differs significantly from the classic rooftop tents, because a closed floor made of GFK or Plywood has been dispensed with here.

Instead, the two single mattresses lie on PVC stretch fabric, which is suspended from a metal tube frame. A construction reminiscent of a foldable deck chair, garden lounger or hammock.

According to the rooftop tent nomad Markus Ganny Koe The Oasis has only one drawback: “The middle bar between the sleeping places. This makes it a bit more uncomfortable for cross sleepers or cuddly couples. The lying comfort, however, is flawless and otherwise a super cool construction. I have already stayed in it with my two girls (then 11 and 8 years) plus Dachshund in it. Troublesome! ” On Traveldiary , he reports on his experiences with the tent.

For less than € 800, the OASIS is a feather-light and also low-cost entry into the world of rooftop tents.

GT ROOF from GentleTent –
Light as the air

At just 20 kg, GentleTent has been looking for the LIMITS of what is possible in the GT ROOF in terms of lightweight construction while at the same time maximising the generation of space. This is achieved, among other things, by completely refraining from metal frames, hinges and joints. This is because the GT ROOF is the world's first inflatable roof tent.

It has some resemblance to a bouncy castle and packed the GT ROOF is a small storage miracle: the entire tent is folded up only a package of 1 x 1 meter basic dimensions and 10 cm height.

Zum Aufstellen wird es ausgepackt und an eine 12 V Pumpe angeschlossen. Similar to a stand-up paddling board, you first fill the inflatable ground platform with air (0.7 to 0.8 bar). This becomes board-hart, provides a stable substructure and isolates at the same time. The part that exceeds the car is additionally supported by the telescopic ladder.

In a second step, the roof is set up. For this purpose, an airtube gear is inflated, to which the tent material is attached. This only takes 0.2 to 0.3 bar and thus forms a stiff frame. With two linen and herring we stretch the RT ROOF backwards and the air bed is ready.

According to the manufacturer, it takes about 5 minutes before you can sleep in your inflatable igloo on the 1.50 m wide and 2.20 m long reclining area. At around €2,300, you are there.

Camargue from Ocean-Cross –
A touch of France

The Camargue is a large salt region in the Provence in the South of France near Arles. A very light rooftop tent is named after her in the range of Ocean-Cross. At just 25kg, it is in the top three in the flyweight division.

The striking resemblance to the Oasis of Trekking is no coincidence. Both pursue a similar concept in the production of the floor area. As with the Oasis, the 2.50 m x 1.50 m reclining surface is formed by a sturdy and foldable aluminium tube frame. Similar to a camp bed, a very rire-resistant tarpaulin is attached to it, which the mattress picks up.

The rooftop tent can be set up and dismantled very quickly, a property otherwise only known from the hard shell tents. The Camargue can also be used on the ground with a fold-out pipe frame.

Visually, it differs from THE OASIS above all In color selection. In terms of price, it is in direct impact distance at around € 770. In weight, however, the two summer tents separate 8kg, but this results in a still almost unrivalled weight of 25kg.

Trophy from Autocamp-
Lightweight for pioneers

AutoCamp's “Pioneer Trophy” model is a Folding rooftop tent of classic construction and 60 years of tradition. With only about 35 kg, the T130 with its 1.30 m wide and 2.20 m long reclining surface is quite a candidate for couples who are looking for a lightweight roof tent for the small car with a limited roof load.

The Trophy models – like all rooftop tents at Autocamp, by the way – are made from Airtex® , a self-cleaning, breathable, waterproof high-tech fiber.

Feather-Lite by FrontRunner-
Here the name is program

With its 40kg, the folding rooftop tent Feather-Lite from FrontRunner sorts itself into the midfield of the lightest rooftop tents in the featherweight division. This folding companion comes with wide opening options to all sides and uses aluminium parts for weight loss.

The so-called HD overdraft rain roof (Fly Sheet) is made of 200D oxford nylon fabric, provides shade and cooling on sunny days and in case of rain it offers the possibility to keep the windows and door open.

The 1.30m wide and 2.40m long bedroom has an outer skin made of PVC coated HD polycotton fabric and relieves the rooftop tent lover's account by just around € 1100. This makes it one of the cheaper deals.

Christopher Columbus already had a weight problem when he returned from his discovery of America in 1493. His Ship, the Santa Maria, had run up to a sandbar in the new world and its crew had to be accommodated on the two much smaller escort ships.

Perhaps that's why Autohome has also launched its Columbus model in a lightweight version. The “Columbus Carbon Fiber” achieves weight savings by using carbon fiber composite material, which is significantly lighter and at the same time more stable than the commonly used fibreglass reinforced plastic.

The Columbus Carbon Fiber S Hard shell tent with 1.30 m wide and 2.10 m long bed weighs only 42 kg and thus saves about 20 weight compared to the normal model. At about € 4,400, the easy Design also costs almost twice as much as his heavier brother.

Rooftop tent nomad Monique Rossmeier thinks the Columbus Carbon-Fiber Gold is worth it: “It allows us to explore the world with a small panda without exceeding the legal roof load. For us, being on the road with the Columbus means pure freedom. ”

The Swiss company Tenturi is also sending a lightweight into the race with the “Tenturi LIGHT.” With its 42 kg, this folding roof tent is not one of the lightest under featherweights, but in compensation you get windows and doors on all four sides.

Particularly noteworthy is the spacious skylight, through which you can still enjoy the view into the starry sky before falling asleep. With a 1.20m wide and 2.10m long bed shop, it is the smallest roof tent in this selection.

The stargazer has to put just under € 1,600 on the shop counter for the lightweight of 280 grams of heavy ripstop polyester.

Overview of the flyweight division

Even in the weight class of less than 45 kg, the market offers some interesting solutions that sometimes have a completely different approach. With the OASIS and the GT-ROOF, there are even models with which you could probably easily convert an e-scooter to a camper. In any case, the excuse that one does not have a sufficient roof load for a rooftop tent can be declared invalid. With these lightweights, anyone can really become a rooftop tent nomad.

Do you feel like experiencing the most diverse rooftop tents in action and sitting by the campfire with other rooftop tent nomads? Then you should not miss the ROOFTOP TENT FESTIVAL 2019 from 16 to 19 May! Camping, workshops, lectures, music, trading area with rooftop tents and accessories and have fun for young and old awaits you there!

Look at what we have to offer! 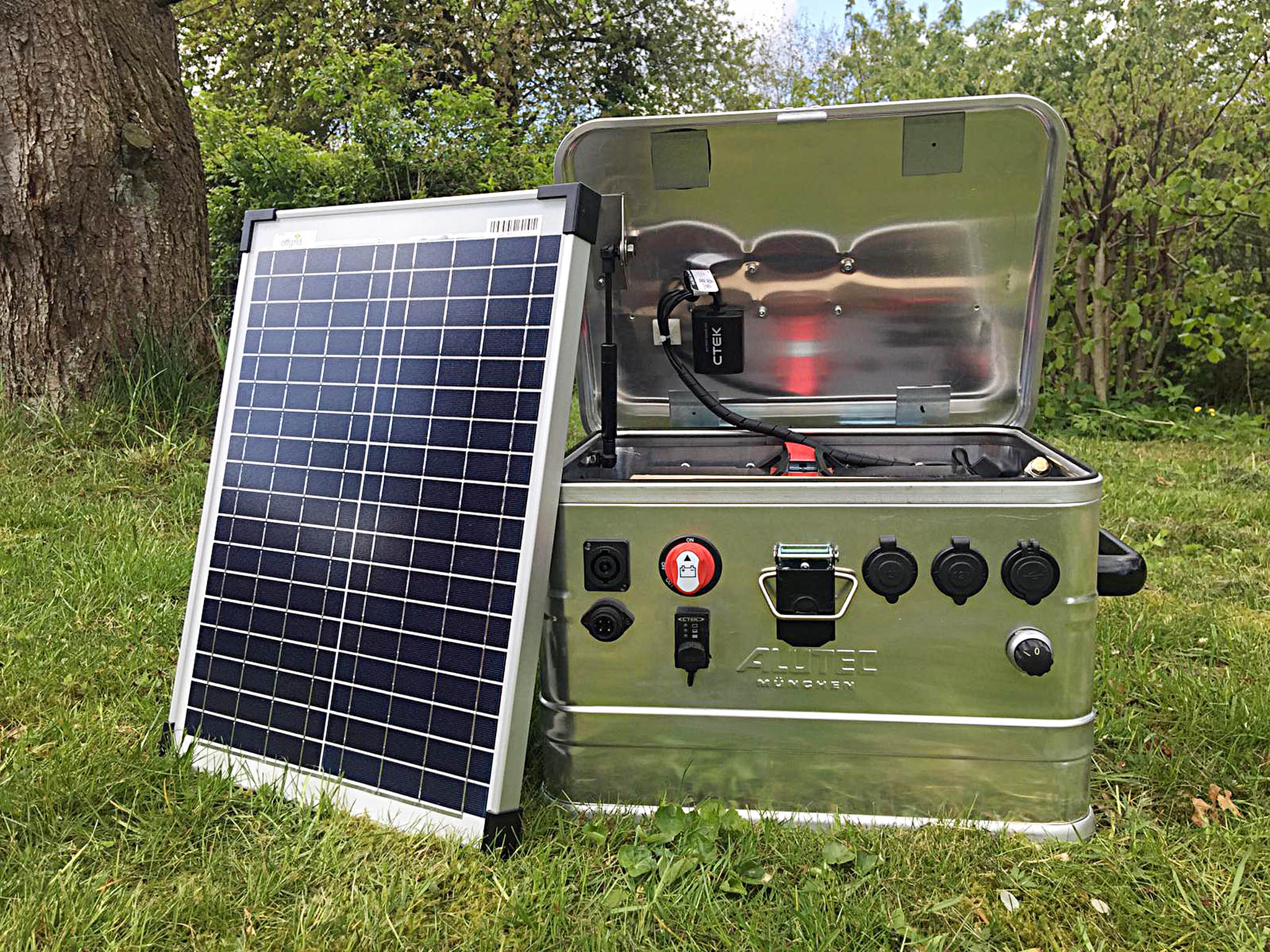 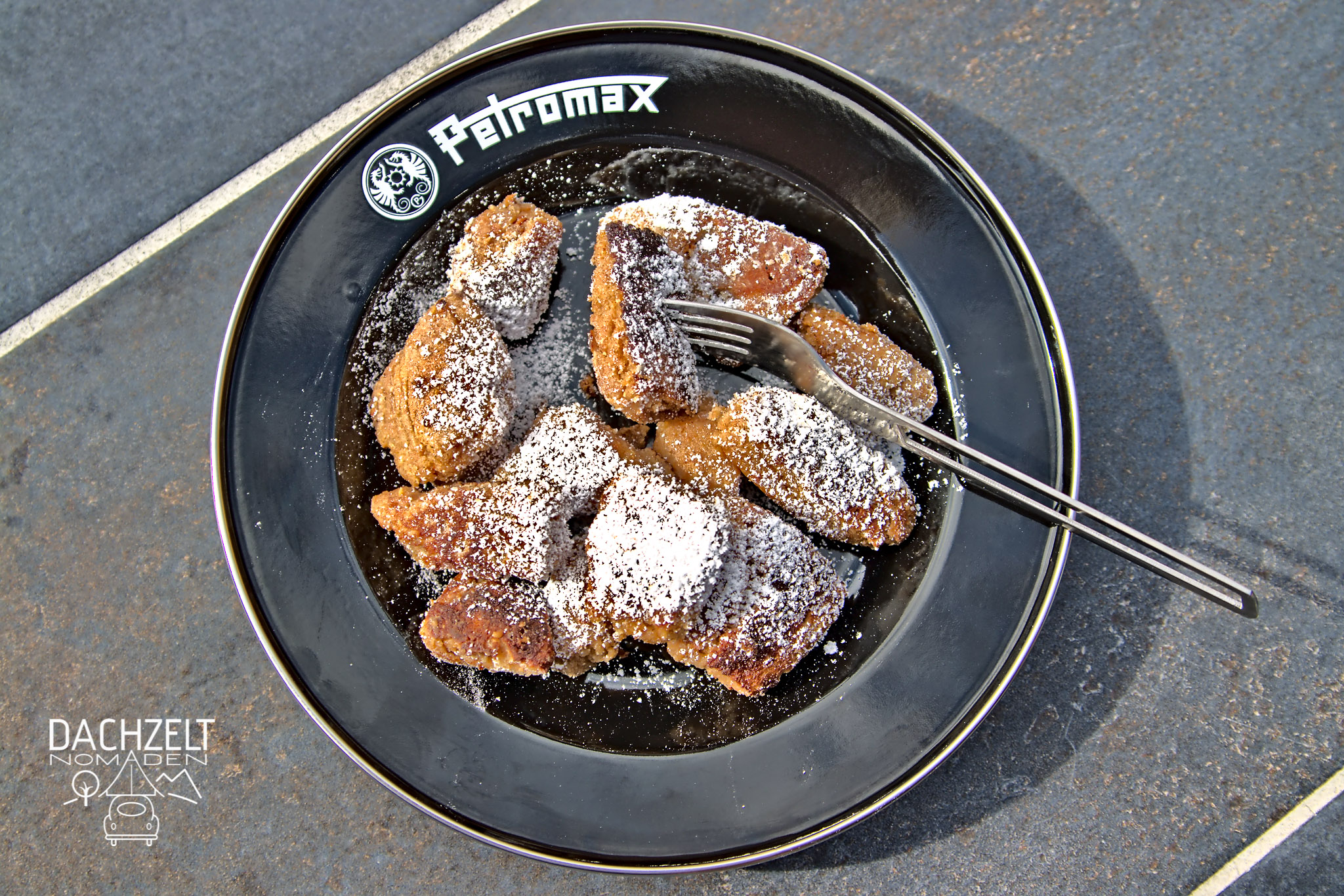 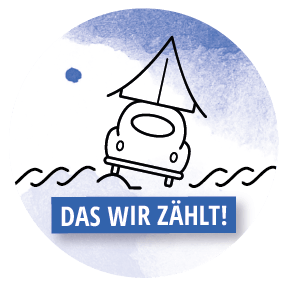 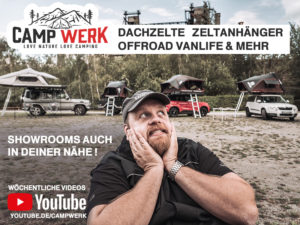 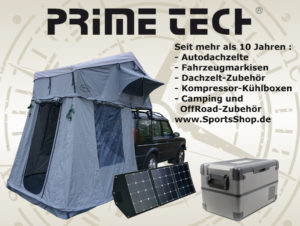 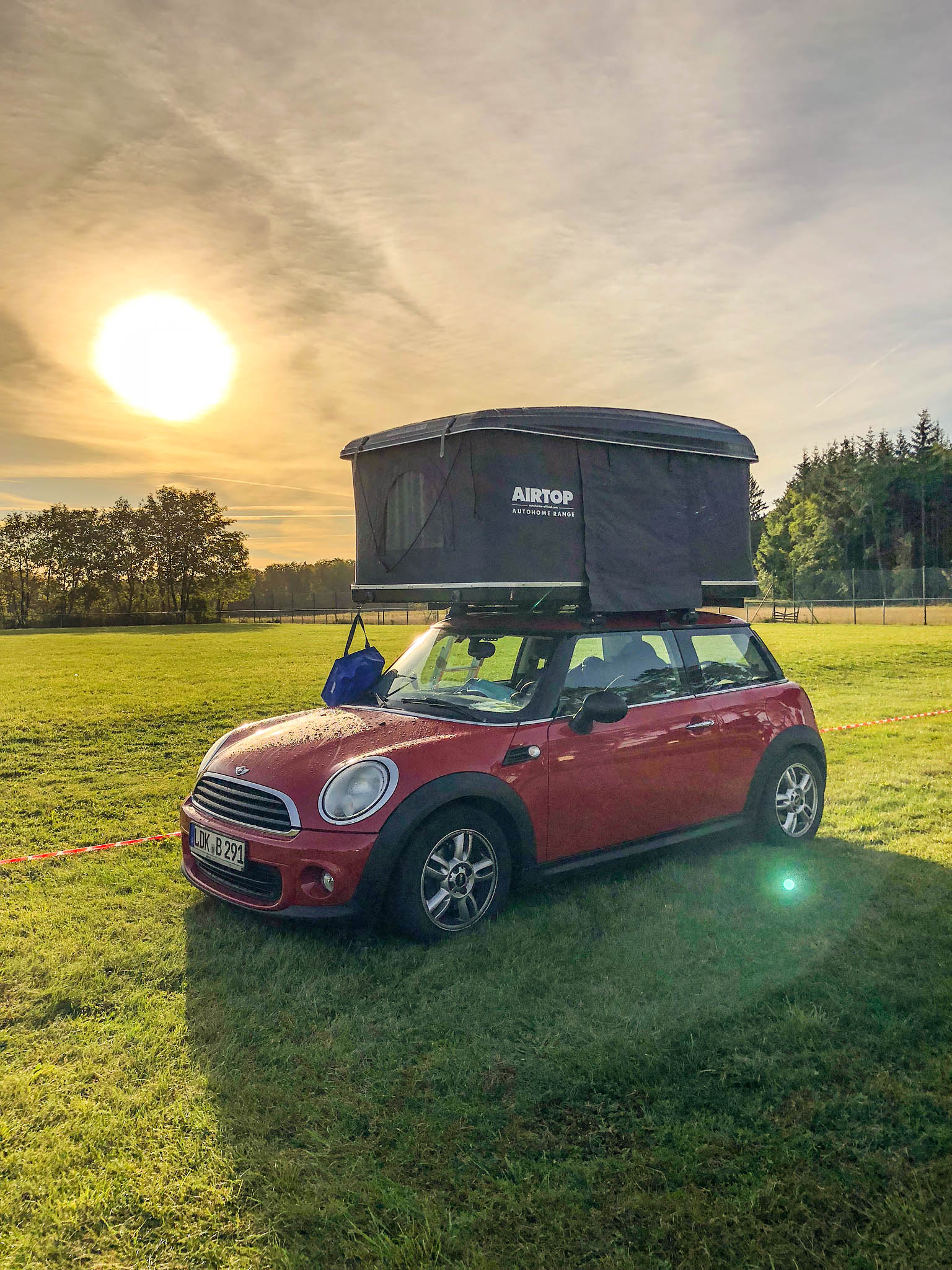 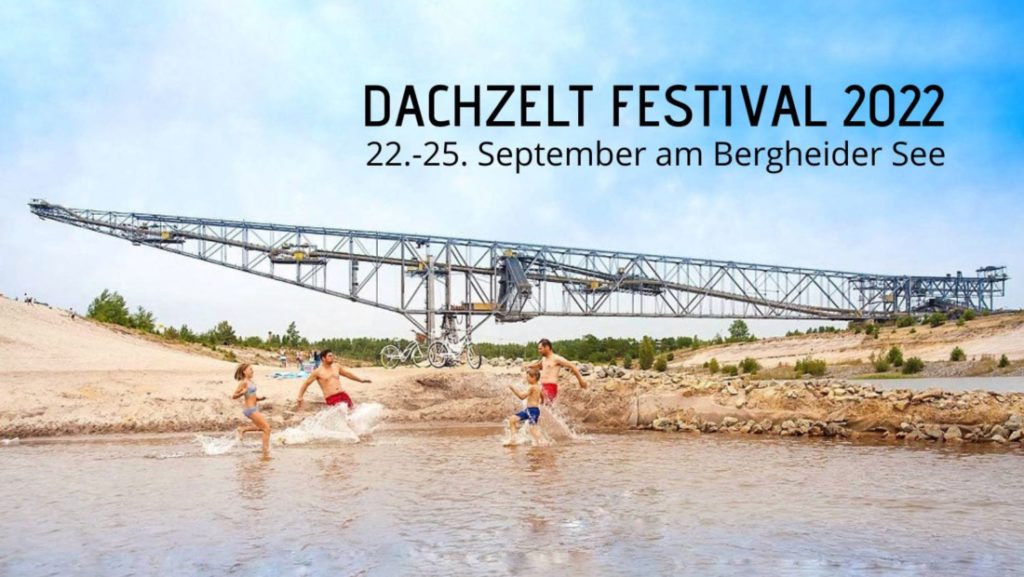